Brought to you by the NHS

I am a huge Olympics fan.  I have always loved the opening ceremonies and had a party in college to celebrate them.  It was a lame party because I lived in a very dumpy apartment and we had to watch it on a teeny screen.  Sorry, college friends.

So this year I decided to go all out and have a big fun party to celebrate the London opening ceremony.  After all, I am a huge anglophile.  How could I not celebrate?!  Over 20 people came and we were having a great time.  Then, the ceremony started and we were baffled.

First, the whole thing was...just...MEH.  Not that interesting.  I mean, sure, the Queen skydiving was great (but man, did she ever look pissed off).  And then, the whole NHS thing started.  What the heck?!  Why would they dance around the NHS logo?  It didn't make any sense.  Should we have this in our next Olympic games?

Then the whole glowing bed thing happened.  Huh.  Don't really get that so much, either. 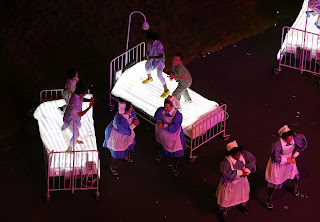 But then the thing went from weird to SCARY!  What the heck were they thinking?  This was like a nightmare! 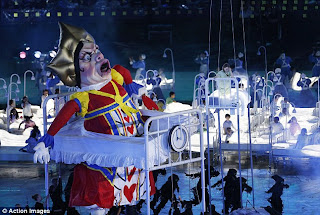 And then Voldemort appeared and they shot the Dark Mark above the amphitheater.  And then the crowd went berserk and spells were flying around and...wait...wrong story. 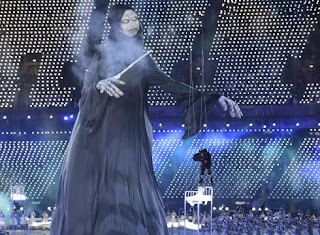 And this, my friends, is what happens if the NHS nurses dance around you.  You turn into a big, scary, dead baby with a bisected skull.  The end of the joyful Olympics. 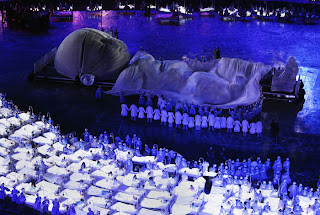 Thankfully, Mr. Bean saved the day with his funny sketch.  I got really depressed when poor Muhammad Ali couldn't grab the flag and I ended the ceremony both baffled, frightened and disappointed.

They should have just had David Beckham run around naked and call it a day.

Posted by Non-Mommy at 3:00 PM 3 comments: Links to this post

Today a close family member had surgery at an openly Catholic hospital.  In a mark of pure idiocy, I showed up to the hospital wearing this shirt: 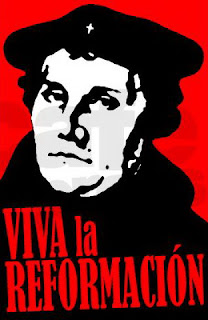 a spoof of the "Viva la Revolution" logo with Che Guevara:

I didn't even pay attention to what shirt I was putting on.  I simply wore clothes that made me look like a softball player (ifyoucatchmydrift).  I didn't even think about wearing a Martin Luther shirt to a Catholic hospital.  Dur!!  So my choices were to keep my arms over my shirt, looking really cranky, or have to look the icon that faced me in the eye and wear this rebellious shirt.  I'm sure Martin would have been proud.

My sister tells me that it doesn't matter, no one thinks about it and, more shockingly, no one knows the history of Martin Luther.  I was appalled.  Is she right?  Do average Americans not know this critical piece of world history?  He was a weirdo, but an inspired weirdo responsible for dividing Christian churches into Catholic and Protestant.

Please.  Tell me you knew this.
Posted by Non-Mommy at 5:30 PM 4 comments: Links to this post

So in case you have missed it, Michael Jackson's mother is allegedly missing.  Michael's children (Prince, Paris and Blanket) haven't seen their legal guardian in over a week and haven't been allowed to talk to her.

Katherine's children, who are pissed that she won't give them more money (in a nutshell) insist that she is just fine!  She's resting and the doctors won't allow her to talk to the children.  You know, the children she's been taking care of!!!

Is it just coincidence that her adult children are upset about money and then she vanishes?  No!  No coincidence at all!

Could she just make a quick phone call?  Apparently not.  Could she Skype?  Nope.  Could she send them an email?  No.  Something is very fishy and it begins to remind me of Norman Bates.  What is going on?  And more importantly, are you freaking kidding me?  Could this family be more of a freak show?

But then, surprise!  They release a picture of Katherine!  She may not be able to communicate with the kids or anyone else, but she sure is able to play Uno!  Of course!

Now, instead of reminding me of Norman Bates, I'm thinking more along the lines of Eva Peron's restless corpse.  You know, the corpse that was well preserved and dragged all around the world, stuffed in attics, closets, and even in a dining room where her hair was brushed every day and a woman climbed into the coffin to absorb her magical powers. 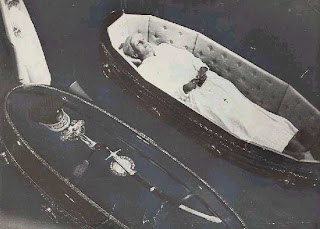 I think they've had Katherine preserved!  She's been hiding in Germaine's closet and he dragged her out and propped her up to the table to look like she's having a great time playing Uno.

All in a day's work in this freaking family!
Posted by Non-Mommy at 7:39 PM No comments: Links to this post

We let go with hope

I am really struggling with blogging since this shooting.  I keep thinking of funny things to blog about, but it just seems wrong.  I used to work in a theater when I was in high school, and I immediately thought about all the poor teenagers that were undoubtedly working that night.

I keep thinking about those poor people trapped in the dark unable to escape.

I keep thinking about the poor survivors and the long road ahead.

I keep thinking about the poor grieving families.  Losing my dad was so hard, but we didn't lose him to the hands of another.  How would you deal with that?

I keep thinking about the poor emergency personnel who had to go into a terrifying unknown.  The men and women that bravely try to detonate this sick man's apartment.

In a few days, I will be able to blog about Katherine Jackson's apparent kidnap.  But for now, I think about those affected and I think of this song by Steven Curtis Chapman after his daughter was killed.

And never have I known
Anything so hard to understand
And never have I questioned more
The wisdom of God's plan
But through the cloud of tears
I see the Father's smile and say well done
And I imagine you
Where you wanted most to be
Seeing all your dreams come true
'Cause now you're home
And now you're free, and ...

We have this hope as an anchor
'Cause we believe that everything
God promised us is true, so ...

So we can cry with hope
And say goodbye with hope

It must be summer vacation from school.  I have time to be irritated that the stupid pigs on "Angry Birds" smile at you when you lose.
Posted by Non-Mommy at 7:14 PM 2 comments: Links to this post

Do you ever get tired of the ordinary "mommy blog?" Do you feel like if you read one more post about how cute Johnny is when he spreads flour all over the house that your head will explode? Do you ever wonder "I wonder what it's like to be single these days?"
Your burning questions will be answered here at Confessions of a Non-Mommy! This talented blogger will manage to amaze you with her ability to moan about being single and childless, complain about her students, wish for more wine and gush about how awesome her life is - all in one post. Yes, this blog could also be called Confessions of a Hypocrite, but it's not.

Stop in and say hello!

Non-Mommy
My name is Non-Mommy. I'm a 30 something single teacher searching for Mr. Right and dealing with other people's kids. In a world devoted to "mommy blogs" I attempt to blog about the life of a girl that isn't quite there yet. Life isn't always easy, and it doesn't always make sense, but with a little humor and a lot of faith, you get through it!